It was a very warm welcome to the January racing season out at SIRC last weekend as RNSW hosted the 2017 Small Boats Regatta. There was talk of rain a little earlier on in the week, but when racing got underway at 8am there was not a cloud in the sky, and the flags on the finish line semaphore were flat. 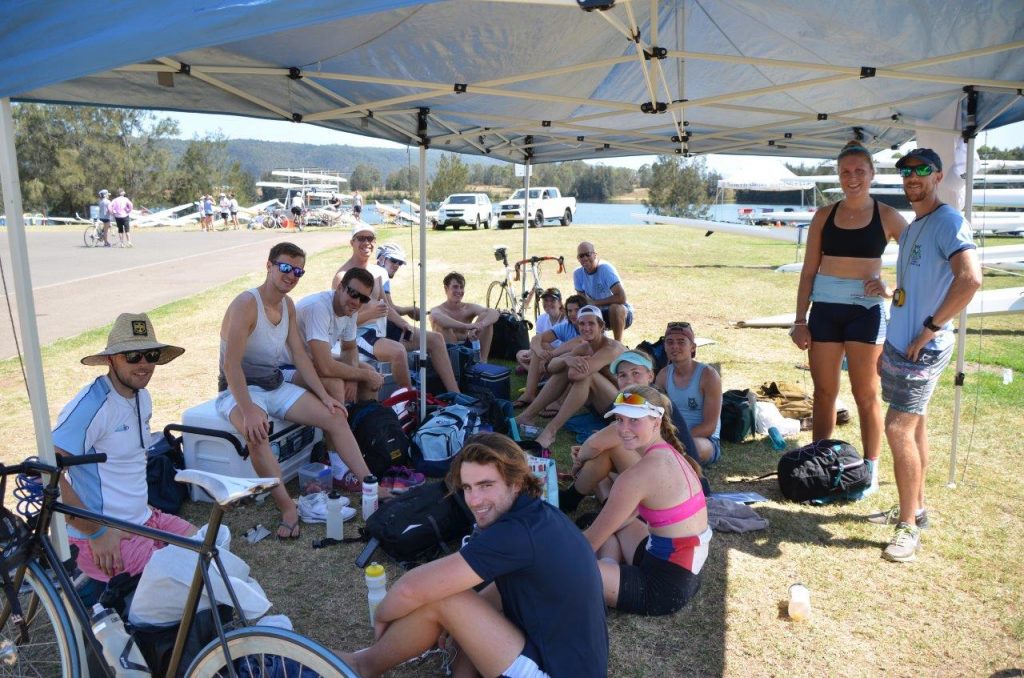 It was anticipated that there would be plenty of spectacular sporting action on the regatta course with many athletes vying for coveted places in state crews; but there was also plenty of exhilaration on the tow path as coaches, coxswains, and hangers-on spurred on our light blue stable mates with vocal vigour and enthusiastic encouragement as they cycled beside each race.

For most of our athletes Small Boats was their first regatta of the year, however there was quite a few juniors who had had a tremendous start to their year with some exciting racing in Taree just a couple of weeks ago. With the bulk of our crews recently returning from Jindabyne, they were revved up to the maximum, ready to race at 110%, some of them taking to the water at 170% – 180%. Sydney Rowing Club was well represented across the field, from U16s right through to masters; dead set we nearly had a crew in every event.

While there was no shortage of exciting racing; here are some of the highlights and lowlights of last weekend’s action:- Luke Stait opened the racing for SRC, unfortunately he didn’t quite get his bow ball across the line first; and therefore it was pretty hard for him to claim victory. The first SRC win of the day went to Fiona Martin in the WM1x, edging out regular victor Kaye Smyth who is just back from 4 months travelling around this great nation of ours. It wasn’t all bad news for Kaye, who went on to take out the WM2x with Dorothy De George later that day. Nick Clifton and Dylan Boakes put on a show to safely show the boys from UNSW how to win the MU23 2x. Our recent Irish import Ryan Baskerville managed to claim victory in the MU21L 1x, narrowly missing out on the MU23L division in the same race. Young Georgia Bradley not only managed to take out the heat in the WU21 1x, but she also took out the final in similar style. Charlie Patterson walked away with the MU23 1x, while Ed White and Nathan Bowden claimed the ME 2- and Jake Brighton and Lucas Giles took out the MU21 2x. The last wins for the light blue went to Harriet Hudson; teaming up with Cara Grzeskowiak from Capital Lakes/ACTAS to scull to an easy win in the WE 2x – . Fabulous stuff.

Notable mention also goes to Tom Barnes who safely won his heat, but couldn’t quite hang on in the final coming off second best to a plucky little colt from the SUBC stables. One of the most popular and certainly most entertaining events of the day was the MU19 1x; with no less than 10 SRC athletes lining up at the start; Concord High and SRC veteran Lloyd Caetano put up a good fight to progress from the heat, through the semi, and into the final in the hotly contested event.

Demonstrating that SRC is not only a fabulous sporting institution, the majority of the athletes and supporters were looking resplendent out at SIRC in the summer heat; proudly wearing their new 100% cotton, light blue SRC tee shirts that Coach Carter had organised – sartorial elegance in abundance! I definitely think that we are in the running to win this season’s Best Dressed Team award. Anyhow, the results of all the racing can be found over at the Rowing NSW website. I tell you what, if the results of the past weekend are anything to go by SRC is going to have an absolute pearler of a season, kicking goals with both feet. Bring on States!