I am the very proud aunt of Joshua Dunkley-Smith, silver medallist in the four at London, and a member of the Rio team. I am soon to visit the Western Front, and appropriately the soldier I have been allocated to commemorate is Captain Keith HERITAGE, a rower with your club. He competed at the Henley Royal Regatta and was a member of the Olympic team in 1912. His story is a fascinating one, both prior to and during his military service. He earned the Military Cross for his gallantry in the field. I will be laying a poppy/small Australian flag/Rosemary at his grave in July just a few days short of the centenary of his death. I was wondering whether your club has a badge (or similar) that I may be able to include in the tribute. I am happy to purchase such an item. Captain Heritage will be solemnly remembered by 40 Aussies and 4 Belgians, and acknowledged with “Lest we Forget” from all. Interestingly he had four brothers who served (all of whom returned) and two of whom were also decorated for Gallantry. Wonderful service from grandsons of a convict transported to Van Diemen’s land. Hoping that you may be able to assist me. Thank you. Marion

Thanks for getting in touch with us.

Yes, we would be happy to give you a club badge to include in your tribute for Keith Heritage. Can you supply a mailing address please and we will send it to you.

We decided we would commemorate the centenary of the Anzac landing by naming four new boats in honour of club members who died in World War 1, and Keith Heritage was one of those members.

At the boat christening we read out the following short biography of Keith Heritage:

“Captain Keith Heritage grew up in Launceston and rowed in the winning Tasmanian crew in the Interstate Eights in 1906. He moved to Sydney where he worked for the Union Steamship Company. He rowed in the winning NSW crew in the Interstate eights in 1911. This crew then formed the basis of the eight that toured to represent Australia at the 1912 Stockholm Olympic Games. The crew competed in the Henley Royal Regatta as Sydney Rowing Club, winning the Grand Challenge eights, rowing in the boat Q L Deloitte which was built in Sydney and transported to Europe. After Henley the Australian eight was reselected and Keith Heritage was replaced. The Australians were beaten by the British crew in the semi-final, the same crew they had beaten at Henley.

On the outbreak of war in 1914, Keith Heritage joined up on 11 August 1914, and was possibly the first Australian to join up.

He did not join the AIF, which had not been formed at that stage. He joined the Australian Naval and Military Expeditionary Force which had been assembled and dispatched to New Guinea within days of the war commencing, with the objective of ousting Germany from its colonies in New Guinea. This was Australia’s first military action overseas in World War One. He served with the British administration in Rabaul before returning to Australia in 1915 and joined the 19th Battalion AIF which landed in Gallipoli in August that year.

He is said to have been one of the last of the Anzac forces evacuated from Gallipoli in December 1915. He went to Egypt and while there was promoted to captain in February 1916.

After several months in Egypt, Captain Heritage was given command of a raiding party near Armentieres in France. On July 1, 1916, his bravery was noted by General Sir William Birdwood, following a successful raid on enemy trenches on the night of June 25-26.

This successful action eventually resulted in the awarding of the Military Cross to Captain Heritage. The London Gazette of August 25, 1916 stated that the medal had been conferred by King George V in recognition of Captain Heritage’s gallantry and devotion to duty in the field. The award related particularly to conspicuous gallantry during the raid on the German trenches when about 20 of the enemy were killed and four prisoners taken. “He carried back a wounded man single-handed and throughout the raid set a fine example of cool courage,” the citation concluded.

Sadly, Captain Heritage was killed in action on 26 July 1916 and buried in the field at Pozieres a month before news of his award was made public. It is likely he never knew of the honour.

Keith Heritage was 32 and a bachelor.

Thank you so much Keith for your detailed email and the offer of the club badge. I will be thrilled and honoured to add it to the tribute, and will email the club a photo.

I am travelling through the area with 40 Aussies and 4 Belgians, one of whom is a folk singer. I may see if I can find the right song for him to sing at our small commemoration. Or perhaps we could all sing the National Anthem.

The information that was read out at the boat christening was wonderful. Thank you for including that.

Having the family connection with an Olympic rower, I can begin to understand the disappointment of being left out of a winning crew!

I recently read “The Boys in the Boat”. What a wonderful read, a real eye-opener. I stayed up until 3 am to complete the book, and I wanted to immediately start it again.

I have researched the other three rowers who were also honoured by your club.

I do not have all their names to hand (on a train to Melbourne), but I remember Wellisch and I will be able to place a poppy by his name on the wall at Lone Pine (witnessed by 30 Aussies) before we travel to Europe. Another rower is buried close to Ypres in Belgian, and there is a faint possibility that I could leave him a poppy too. Next year I hope to be visiting Lemnos, so hopefully I could visit the grave of the other soldier at Mudros cemetery.

Thank you again for your willingness to add to my tribute.

I wish your club well, and particularly those members who will be at Rio.

I was perusing your annual report on line yesterday and was so impressed by your history.

I recognised many names who are/have been crew mates of Joshua.

Fingers firmly crossed for all, but particularly the men’s four. The Brits may be just too strong, but you never know.

Our group of “Feel the Spirits” travellers have had some wonderful large and small commemorations over the past 5 days. 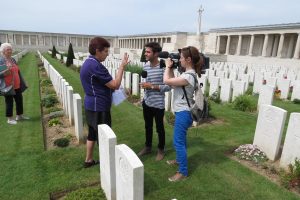 However, yesterday was very special for myself and the group, as they listened spellbound to the story of Keith Heritage.

When we arrived at the Pozieres British cemetery there was a flurry of activity. The military was rehearsing for the re-burial of three WW1 Australian soldiers.

(We witnessed a reburial with full military honours two days. It was remarkable.)

As there will be the centenary commemoration service tomorrow, there were also film crews, including one from French TV, who seemed keen to talk to Aussies.

As you can see by the attached photos they filmed my talk, and then interviewed me afterwards. I left the written information about Keith with them.

I doubt I will ever see the footage, but that doesn’t really matter. It was about Captain Heritage and not me.

Also by the photos you can see that I left a few things by his headstone.

A friend of the family knitted a poppy for me, and on it I placed the SRC badge, a small Australian flag and a pebble from the beach at Gallipoli.

One has to have faith that these things will not be pilfered, but rest assured 39 Aussies and 34 Belgians were moved by the story and were proud to echo “Lest We Forget”. 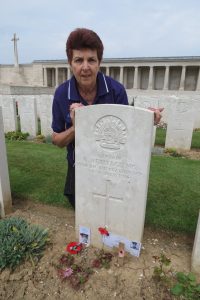