A migration assembles on a wooden pontoon.

To heads, place, launch! – and the waves they festoon.

Such was the origin of our aspiring rowers. Under the tutelage of Paul “Eskimo” Coates, Luke “Traps” Stait and Sean “’60s” Madeley, the future of the tribe club tested their wings and took flight. We’ve followed their story from the very beginning; the falters, the sacrifice, and the triumph. Now, in the final instalment for this season, we witness the thunderous climax of their interwoven journeys. The hand of Destiny, esoteric in design, had ordained their paths, like rains after drought, billow and muster down dusty riverbeds until they crest and collide at their tumultuous destination – Taree. 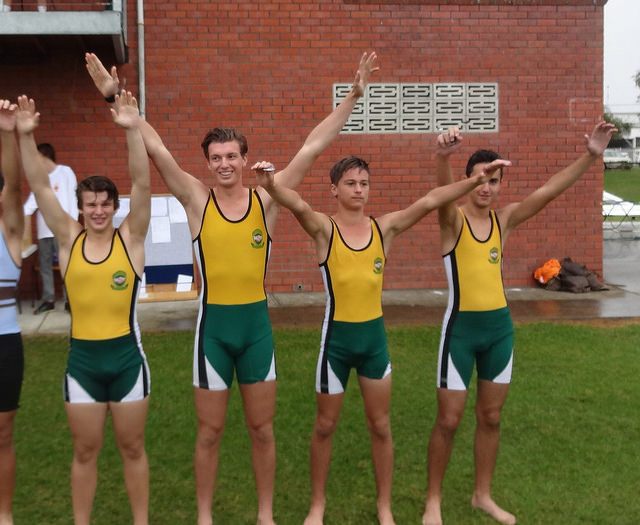 School ended on Friday 29th to the usual hustle and bustle of relieved weekenders. The CHS competitors each piled into their respective vehicles and, with Curtis “Battlelines” Aroney toting our Newington-donated trailer, embarked on the 5 hour drive north. Sydney eventually jettisoned the sluggish traffic onto the motorway for a cheeky Macca’s run; coal was all the rage; Civ 5 helped pass the time; and a cheeky accruing of beer mats saw one nifty little man become a surrogate father. After reaching the motel and cooling down with a few rounds of 500, the boys and coaches retired to their ample accommodation. A big day lay tomorrow.

Saturday saw a sleepy entourage ambling its way towards Manning River Rowing Club. They were greeted by recent emigrant Hugh McLeod, but there was no time to play catch-up. The Men’s Championship Scull saw Lloyd “Sing-a-long” Caetano place second in his heat and Max Brenner place first. The sole Asquith Boys High School competitor Evan “Cameraman” Wang also came second, an achievement made all the more notable given it was his first CHS.

Not long after was the under 17 Double Scull. The first heat was graced with four vivacious combos, the first being Ben “Soap” Brenner and Tal “Tobasco” Lewis from Sydney Secondary College, Leichhardt Campus. The second double was from Concord High School, Cristian “Feet” Pezo and Lucas “Uncle Grandpa” Chabo. From the Fort were Stephen “Coup” Lowe and Bradley “Fisheye” Deng in one boat and Aaron “Sunscreen” Winata and Richard “Tinder” Quach in the other. Tal, Lucas, Bradley, Stephen, Richard and Aaron were at their first CHS after months of dedicated training. A long battle down the course saw Leichhardt and Concord progress to the final. In the other heat were Jason “Noodle” Huang and Adrian “Ducktor” Castillo racing against John “Hen” Bivell and Alexander “Smug” Migdalias. For Jason, Alexander and Adrian this was also their CHS – John and Alexander progressed to the finals.

The Championship Men’s Scull Semi-finals returned later that day; Evan placed a well-earned third and Lloyd and Max progressed to the finals. Our two under 16 rowers,  Andrew “Twenty Dollar Bill” Li and Rahel “500” Sahni hit their double heats soon after but were o’ertaken by a Boy’s High rower and Sydney acquaintance Tim “Lamb” Trent. The under 17 Men’s Scull saw Richard, Stephen and Lucas row exceptionally, especially considering it was the former two’s first single race. John and Cristian progressed from their heat – ditto with Tal – while Ben Brenner in the elimination position of third pulled off an incredible 20 metre push that saw him come from two boat lengths behind to take a cheeky second place and progress, to the jubilation of his screaming team mates onshore, to the final. Max and Lloyd pulled an easy win in their Championship Double Scull, gearing up for the big race of the day and indeed the regatta – the Inter-Regional Eight.

A bizarre conglomeration of singlets and zooties cast off from the beach that afternoon. In stroke, 7 and 6 seat were the green and gold Concord colours: Cristian, Lloyd and Max. Next was a fine Bathurst lad by the name of Simmons who joined the Sydney North eight on account of being his region’s sole rower. After that was Evan representing Asquith leading stroke four, the remainder of which were Fort Street pair Alexander and John with Lucas from Concord in bow. Our cox was from North Sydney Girls. The mood was confident in the boat as they sallied to the start line: some snappy and at times scathing banter took place between the Sydney North eight and the bow pair of the Sydney Boys eight next door, Tal and Ben from Leichhardt. Despite some cutting words from Max Brenner to his younger brother, the Sydney Boys/Leichhardt eight flew off the start line and held a narrow lead all the way down the course to trump the expectant Fort Street/Concord/Central Tablelands/Asquith/North Sydney Girls crew. With the banter resolved in the heat of the race, the first day drew to a close.

Sydney Boys and the Sydney Rowers all headed to the beach right after the races ended. A hearty game of cricket and some turbulent waves were had as the Sun set behind the continent. Once the mad sand sprints and beach-going were exhausted – despite the arrival of both teacup puppy and horse – the boys went home for a hearty barbeque. A phat pheed was provided with all manner of sumptuous meats. A massive shout-out to the coaches as well as the supportive parents: Mr Bivell, Mr Migdalias, Mr Brenner and Mr Lewis. Dinner done, the rowers had a cheeky night full of cards, Uncle Grandpa, How to Train Your Dragon and assorted pillowy altercations.

Sunday. Finals Day. The nerves were up – this was serious. It was where novices become rowers, boys become Ben and might begets medals. The U17 double was stacked with our lads – Fort Street, Concord and Leichhardt represent. At the word go, Maitland Grossman took off and left a hard-fought battle in their wash. Crabs were caught, medals were sought and John and Alexander took the silver home for Fort Street. Third was taken by Ben and Tal while Concord left Sydney Boys in the dust in fourth. A great achievement all round – but it wasn’t over yet. Leichhardt and Concord jumped straight into the pairs and blitzed the Championship Final. Max and Lloyd came first, Cristian and Lucas came a solid second second and Ben and Tal fourth after some navigational shenanigans.

“Behold,” the wise proclaimed while viewing the U17 Coxed Quads boating, “beyond lies the beef.” Sydney Boys, Fort Street and Fort Street were gunning for gold. It had started to rain but spirits were kept up; the weather smiled upon the rowers as start time drew near. With an enthusiastic exchange of “Good luck!” they accelerated off the finish. Oh, how they fought the lions of Sydney Boys. The cox John bellowed himself hoarse egging his crew of Alexander, Adrian, Andrew and Rahel slowly onto first place, while opposing Fortian coxswain Stephen kept the boys Jason, Richard, Aaron and Bradley working hard down the track. With 250 to go, it was now or never. John urged his crew to within a few bowballs of first place – but a last 20 metre push by Sydney Boys secured them the victory. A solid race, a solid achievement – next year, they conferred, would be crunch time.

Max and Lloyd took out first and second in the Men’s Championship Scull, with Max’s lead matched only in immensity by the C on his back. Once again, the eights lined up, this time for the Championship Eight. It was Sydney Boys, stroked by Tim Trent, versus Fort Street – Bradley, Jason, Adrian, Alexander, Richard, Rahel, Stephen, John and coxswain Aaron. This battler crew had trained hard together, having spent the last five months discovering the sport. Facing an experienced eight, they remained undaunted in the face of adversity and gave it their all. From the moment the starter blew his whistle, they showed their mettle and gave Sydney Boys something to fight against for the race. The experience High boys won a solid victory, but they had been warned. The warning shot graze their neck. Next year, they muttered, when the congratulating cheers had subsided. A hardened Fort Street crew would tap up to the start, ready to take that shield home to Petersham for the Fort.

The day slowly wound down – Cristian, facing an international rower from Maitland Grossman, came a well-earned third in the U17 Single Scull Final, with Ben, John and Tal taking the following positions. The Championship Double Scull was won with ease by winners Max and Lloyd who, with the exception of the Inter-Regional Eight, received perfect win scores. Max was proclaimed most proficient male sculler, while Sydney Girls won the regatta point score yet again over Sydney Boys and Grafton. With big grins, school chants and a bucket load of fresh CHS merch, it was time to leave. This 17-man team could never have existed without the parents who came along, but especially without the dedicated coaches. They put in countless hours of training, advice and motivation; they’ve been truly legendary. Shout out to Sean and Luke for stepping up and always helping out, and of course to Paul for the Trump memes, Migoreng chats and oodles of rowing loot. The lads had come a long way – for Evan and Max their CHS journey ended in 2016. But for team icon Lloyd, old-timers Cristian and Ben, and of course the dedicated and upcoming squadron who showed such commitment and humour these past five months – they will return. CHS had been scorched by the flames of Sydney Rowing Club. Now, as CHS 2017 beckons, be warned – they, tasting victory, shall idle ne’er be.