The SRC decks will be cleared during August with a total of 6 junior athletes and 2 coaches selected for World Junior Championships set to which take place in Rotterdam from 21-28 August. The Junior Men’s 4X is an entirely light blue crew – Max Brenner, Pasha Bevan, Thomas Barnes, Jackson Kench and coach Lachlan Carter. 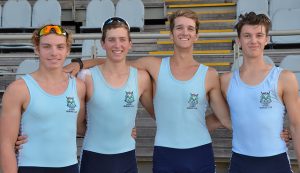 Romola Davenport has earned a seat in the women’s quad and Harriet Hudson will be coached by Don Cech in the Women’s single scull.

Don telling The Catch: “I am really excited about the talent we have in our SRC junior contingent at the moment.The guys and gals have shown great temperament and composure in their racing this season and with their continued physiological development we are looking really good as a club going forward into the u21 and u23 age groups in the near future! For now we will focus on absolutely smashing our best possible races at this year’s Worlds and hopefully bring back medals from Rotterdam!”

Coxswain George Davis will be steering the Men’s Under 21 eight in the Trans Tasman series against New Zealand. The first regatta will take place at SIRC 30 June – 2 July with the return leg on Lake Karapiro from 8-10 September. Click here for full selections list.