SRC Preps for Season at Perisher – by Coach Carter

It was a typical stinking hot start to the year in Taree and Penrith. 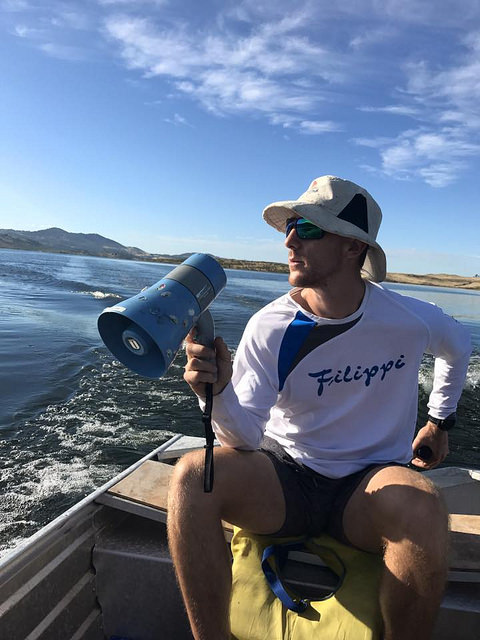 Good thing we were in the Perisher Valley instead. The temperature was a cool 20 degrees every day and the hottest it reached was about 29 degrees on the water which was perfect. The 0 degree mornings felt like 15 degrees which was very strange.

The camp consisted of a wide variety of activities which eliminated any boredom. They’d row 20km each morning and climb Mt. Perisher after brekky at 11:30 for the second session. In the afternoon the rowers would do a 75’ technical row if the water was good or go into town for their Strength and Conditioning. Other afternoons would simply consist of some aerobic topping with 90mins on the ergs and Watt bikes. The Ski Erg was everyone’s favourite machine as it gave everyone a new stimulus which worked the legs and core with a bit of bicep action. Anyone who doesn’t like the ski erg is generally weak. 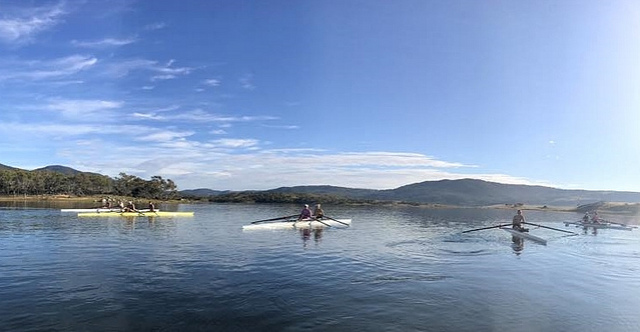 The heavy training days consisted of either a long cycle or the Kosciuszko-Main Range trek/run. The 2hr cycle up the long gradual ascents were either from Guthega or Jindabyne all the way up to Perisher Valley where our Ski Lodge was located. Clinton Boltman had a slow trip up the hills on his mountain bike but endured the climb and arrived just in time for dinner. Everyone else had finished about 2hrs before him. On the first ride JB had worked so hard on his mountain bike to be one of the first guys back until Nick Clifton snuck up on the inside of him up the driveway to beat him back with everyone cheering them on. JB said Cliffo would never be picked in any crew boats again after that. 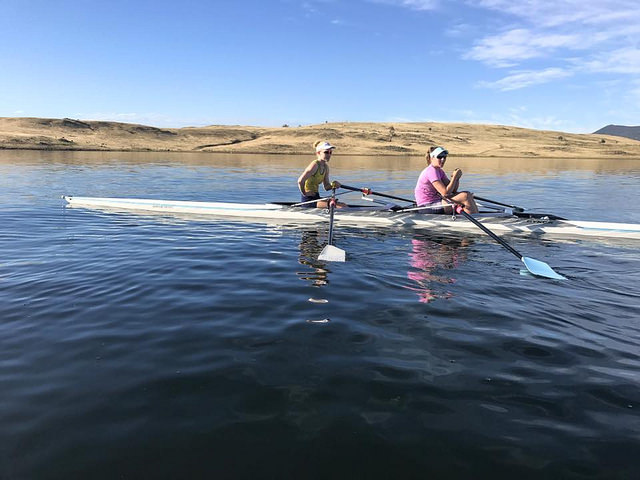 Lloyd Caetano won the good bloke award for the camp but did not win any awards for being a speedy cyclist. Last year everyone said he showed a lot of guts last summer but the only guts he showed were the ones hanging out of that skin tight Sydney shirt of his. This year Lloydy lost a few kilos and is keen to get back down to lightweight again.

The 22km Kosciuszko Main Range trek was a gruelling 3hrs on foot. Ed White was 11km from Charlotte’s Pass when he landed in some mud and snapped his ankle in half. Coach Don Cech couldn’t believe Ed’s luck as he was literally as far away from the cars as possible. Luckily Dylan had some sticky tape and put Ed back together. He was in agony when he rolled the ankle and was very lucky that he didn’t do any serious damage. Everyone offered to carry Ed all the way back but he refused and battled his way back to the cars on his own two feet. Amazingly, Ed woke up the next morning completely fine. This is just some of the marvellous courage, spirit and determination that you can expect from SRC athletes.

Some of the standout athletes from the Trek were Charlie Patterson who finished first with an army pack on his back (not with much weight I might add). I think it was just for show. Charlie was closely followed by Candice Williams who punished everyone up and down the hills. She showed spectacular aerobic ability and surprised a lot of people as to how quickly she could conquer the mountain. A couple of big strong strapping young lads from Newington joined us on camp. Alex Nicol and Harry Crouch. Harry showed his country toughness as he ran with me for the 9km to the top of Mt. Kosciuszko. Thankfully he was happy to go at my slow pace.

Alex and Harry did some great work in the pair together during the camp and are showing a lot of promise. After stepping on a red belly black snake up Mt. Perisher, Harry ensured that snakes were not going to be a problem for anyone. Mt. Perisher is a 1600m climb with 300m of elevation. It tests everyone and is very deceptive in how tough it is to even just walk up. It takes a non-athletic regular person (NARP) about 25mins to climb. The rowers are generally pretty tired from all of the other training they are doing so they can walk up in under 20mins. The better guys will take about 17-18mins without pushing it too hard. Since I’m fresh as a daisy, I spent some of my free time attempting to get to the top as fast as I could. As an all-out maximal effort, last year I ran up in 15min 41sec and after 4 attempts this year I got to the top in 15:22 which is a new world record. Going under 15mins would be a tough ask but I think only Chris Morgan, Spencer Turrin or Angus Moore have the capacity to do it. Maybe they are too heavy. Perhaps the lighties are better suited to the steep ascent. I’ll have a crack next year. I’ve done 2km erg tests and plenty of hard rowing races but I don’t think anything tested me as much as this. My heart rate sits at 173bpm average and my breathing is out of control and parts of it are too steep to run. Sometimes it is quicker to walk those bits.

Susie Dear also found the climbs very hard. She said “I found the climbs very hard”. Very insightful. On the way down it can be very sketchy. Most people have the occasional slip and fall. I managed to stack it on the way up and hoped Kendall didn’t see it but she did. One of the worst things on the climb are the horse flies. They latch on and keep biting so you need plenty of aero guard. You end up slapping yourself the whole way up and down the mountain and you look insane.

The rowers had plenty of time to recover and when they weren’t passed out on the lounge they would spend a lot of their downtime playing board games. Scattergories, Chess, Articulate, Poker and Cards Against Humanity. Articulate was a popular game in the first week until Nathan Bowden and Will O’Connell memorised all of the cards just so that they could be the winning partnership. It turns out most of the rowers were not very articulate though. Georgia Bradley is probably the smartest girl we’ve ever met and she couldn’t articulate the most famous Batsmen Australia/the World has ever seen to her partner Romy Davenport who is also from Sydney Girls High and incredibly bright. In a 30sec time limit Georgia started to articulate to Romy…

Georgia “Ok who is married to Angelina Jolie”?

Georgia “what’s the opposite to a woman”

Georgia “Yes now put all of those names together?”

Everyone just lost it completely and were in hysterics when we found out that Georgia was trying to get Romy to guess ‘Donald Bradman’. Maybe you should try mentioning that this person has the highest test average and is the most famous name in Cricket.

Nathan and Will walked away with another victory and the next day everyone decided that poker was the next game to be played. Coach Don Cech showed his poker face and cleaned up a victory in a game of about 10 people. Alex Lloyd was second and unlucky not to draw a good hand and finish Don off. Mario Kart on the 1996 Nintendo 64 was very popular. They should have stopped making computer games after this because it’s perfect and nothing surpasses it. It was a good feeling to school the late 90s kids on how it’s done. Most of the guys were just awful especially Will O’Connell who can only play Wario Stadium and can’t even win when he uses the lightning to knock people off the jump. What an amateur.

The food at this camp was second to none. A bigger than really big thank you must go to Sally and John Clifton who worked tirelessly each day to provide the best rowing camp food any of us have ever had (Sorry Steve). There was a party in everyone’s mouths with every tasty meal. Eggs benedict or B&E rolls for brekky and cooked lunches. The dinners were insane and I think I went overboard on the sticky date pudding for dessert.

Everyone likes Nick Clifton so much more now because of his parents cooking. More thanks must go to their helpers, Roger Brighton, John Duignan, Dave Greenslade and Steve Graham. These guys helped to prepare meals and clean dishes so that the athletes could rest up. These contributions to the club make a big difference and go a long way to helping the athletes be the best they can be.

It was great to have Alex Lloyd at the camp as he worked to prepare himself for King’s Cup selection in the pair with Olympic bronze medallist (2012) Chris Morgan. Morgs is also a World Champion in the coxed pair so the coxless pair should be a piece of cake. Especially since Lloydy is Australia’s best stroke side rower. Lloydy lead the way on the Guthega bike ride but his time off has cost him some fitness as he was unable to beat Nathan Bowden up to Perisher Valley.

Max had a break from Mt. Perisher for one of the days and ran the Main Range track with the token Irishman Ryan Baskerville in less than 2.5hrs. Super effort that. Ryan told stories of famous Irish dishes. One of which includes three varieties and styles of potatoes. On the water Ryan was having some difficulty with the height of his gates. He asked me if I had any spare ‘pop fuks’. I was very confused as to what a ‘pop fuk’ was but he was talking about the blue spacers that you pop on and off the pins to adjust the gate heights. He said “you ‘pop’ them off, and when they fall in the water you say ‘fuk’!. You know… ‘pop fuks’”.

There were heaps of other things that happened. Dylan capsized again. He seems to be making a habit of this. It’s a yearly thing he does at camp. Georgia’s hat blew off while she was rowing. Ah what an event that was.

While the girls were busy eating all of the cookies, there were about 50 kangaroos chewing all of the shoe laces in the rowing boats down by the water. Every night they would lick the oar handles and shoes in all of our boats because they love the salty surprise. Every morning we would arrive at the boats ready to row only to find out that the shoe laces have been chewed in half and there are Kangaroo poos all through the tinnies. 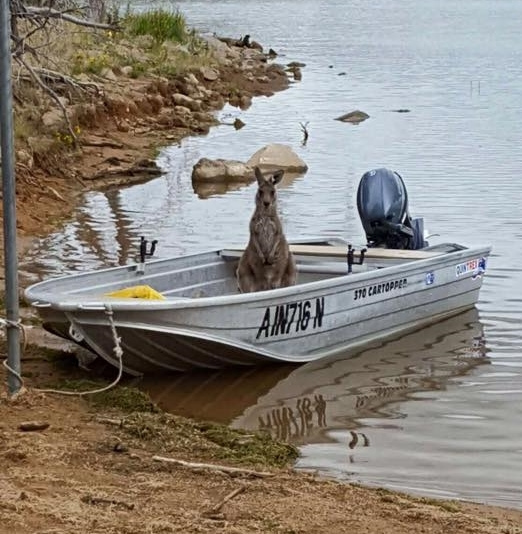 On the last night we went into Jindabyne to have dinner at the Bowling and Sports Bar. We played barefoot bowls and then went in for some trivia with dinner.

All in all, it was a fantastic camp and one which everyone made significant gains in the technical and aerobic ability. The daily training environment and culture was on point as everyone got on with the tasks at hand and worked hard to make the camp a great success. Thanks to everyone involved and all the best for the rest of the season.