SRC President Keith Jameson OAM: “I was delighted with the club’s performance at the National regatta. What was most pleasing was that we achieved success at all levels, from Junior to Elite Senior, and that our members not only rowed well, they also enjoyed themselves”.

Club Captain Paul Coates: “It’s a wonderful feeling to be part of the best rowing club in Australia”.

Vice Captain Kendall Brodie: “The club spirit during nationals was palpable and it showed in how the SRC athletes raced and supported each other throughout the week. Both the Men’s and Women’s Club eights reaching the top of the podium was a special result and the vibe that day was great. Being apart of the NSW Queen’s Cup crew that reached the podium for the first time in eights years in third place was a particularly rewarding personal achievement”.

Chappo’s Mum: “While some parents would be nervous watching their children compete at the highest level, for Mrs Chapman the sight of young James in the blue of NSW is a familiar one. As he rowed to the start line of the King’s Cup, she was relaxing with a cold drink at the regatta bar, “One last win would be great, but he’s had a good run.”  Many drew similar reflections on James’ 13 appearances for NSW following the crew’s defeat at the hands of the Victorians for the 2nd consecutive year”.

Harriet Hudson: “After recently moving to Sydney to join the highly regarded Sydney Rowing Club, my nationals competition experience was my first as a non school rower Wearing the light blue colours of SRC and representing one of the best rowing clubs in the country (the medal tally score agrees) was definitely the highlight for me. Upon arrival in early January, I was pleasantly surprised with the camaraderie that the club encourages, and this was even more evident last week. Support came from every direction, whether it was words of advice from the river bank with Carts, JB and Don following every race on their bike, or a shout out from fellow club mates as they rowed through the bridge up to the start line. This family environment is one which is not found in most clubs, and one which is obviously cherished and enhanced by the longer standing members”.

Charlie Patterson: “The Nationals were pretty exciting for me.  The atmosphere was intense. It was a great opportunity to show what I was capable of and get into some serious racing. The highlight was representing NSW in the State Youth 8. We put in some solid training and built great crew spirit which paid off winning the Noel F Wilkinson Trophy. Thanks to JB, Will Raven and Kurt Thomas. It was great pairing up again with Max Duignan in the U21 2x where we held off Queensland for a solid win. I also won the quad with the two Max’s and Boakesy. That was a great race. I was also pretty happy taking silver in the U21 singles against Adam Bakker. All up I had a top week and it was definitely a great result for SRC”!

Dylan Boakes: “The best part of nationals for me is the level competition in every boat class and age group. It’s always great to get out and race quality opposition every time you get in the boat. It’s a great yardstick to see where you stand and deeply satisfying when you get the results you want. It’s also fantastic to be able to watch the racing amongst the open divisions, it’s a rare opportunity to watch world class athletes first hand and one that’s always enjoyed”.

Max Brenner: “The highlight of nationals, as any sportsperson would say, was the racing. But for me it’s more about the mental preparation that goes on prior. The nervousness of the days before racing is always what gets you. The thoughts of how the race is going to go and if you will perform your best kept me awake at night. In German it’s called “Lampenfieber” which literally translates to “lamp fever”, but is pretty much performance anxiety. I guess the highlight was the satisfaction of doing well and performing your best when the moment calls for it.What most outsiders don’t see is the pride of the club doing well. Seeing everyone asking the simple question, “How did you go” shows so much caring and compassion for all members of the club. It is at nationals when Sydney Rowing Club really comes together to not only show its racing spirit but also its team cohesion”. 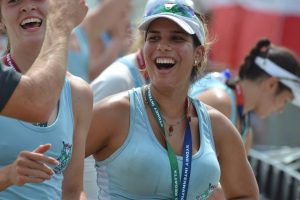 In her first season at SRC, Brianna has been part of the successful and growing women’s squad. The season, which began in earnest at the Newcastle regatta in September 2015 and saw wins at Taree, the SRC Regatta and the Gold Cup, culminated in a barnstorming win in the Club women’s eights on Sunday. Racing a UTS crew that featured Australian representatives the young Sydney crew were underdogs but executed their race perfectly, “Coach Carter instructed us to win, and we did”.

JB took home the biggest swag of coaches medals for the week, with his squad of youth athletes taking all before them over the week. They cleaned up the U21 boat classes and provided the bulk of the athletes in the Club crews on Sunday. There was also a large contingent of Sydney men in the interstate youth eight who pleased Jason with their performance “Rowed hard. Done Good.” Unfortunately Jason’s other star athlete Eric Horrie suffered an injury during the week, but was still able to win his single.

For Leah, the week saw a silver in the open quad and bronze in the pair, but the big event was always going to be Queens Cup. While the dominance of the Victorians remains, the young NSW crew is gradually closing the gap to the top and this year finished in 3rd place. Leah was proud of the effort, “We gave it everything”.  Coach Dan Noonan has already predicted a bold showing in 2017.

The club’s lightweights toiled hard but had limited success during the week, with their Sisyphean determination perhaps best exemplified by migrant oarsman Matt Bladen. Matt struggled across several boat classes during the week, with strong training efforts unable to be translated into race success. Eventually however there was wealth for toil as he partnered Tom Cavanagh to a Bronze medal in the U23 lightweight pair, “I thought we could go faster, but apparently not”.