Our crew has left Henley after showing great speed and form in their two races. In the first round they beat a tough opponent in a time that was by far the fastest of the day in all events. In the second round the crew raced NSR Oslo in a close encounter. Despite crossing the finish line first, they were unfortunately disqualified for a blade clash, which allowed the Norwegians passage ultimately through to the final. We believed this crew had the speed to win the Thames Challenge Cup. From the racing they did, all time splits posted on the course pointed towards a Sunday finals show down, so our consolation is that our first impressions of the crew were accurate, this was a quality crew capable of success. Despite the disappointment of their disqualification, the long period of preparation and training will provide great benefits for our squad as they move into next season. I look forward to seeing what the core of this crew can deliver in regattas next season, with almost all the boys eligible for under 23 crews, I think we will turn the Selector’s heads. 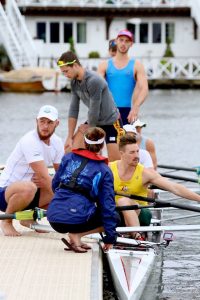