Members past and present came from near and far for the Sydney Rowing Club Foundation Cocktail Party, in support of the club’s future. The room was filled with Sydney Rowing Club members dressed in club and honour blazers, showing that club pride runs deep with this audience. The energy in the air was building as members circulated the room, catching up with old teammates and meeting current athletes. 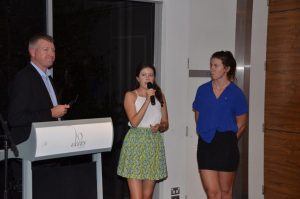 Andrew Rowley opened the evening and invited current athletes in attendance to join him at the microphone for some questions. Past Vice Captain Leah Saunders spoke of the important role the club had played for her as she moved to Sydney from McLean at the age of 18 and knowing very few people, the club became her instant home and its members her new friends. Current Vice Captain Kendall Brodie gave the credit of her coxing to the athletes, coaches and mentors and to the opportunities to travel on international tours. 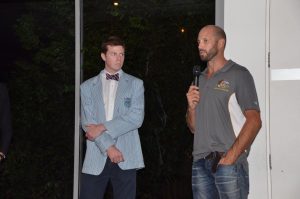 Current Australian Men’s eight members Josh Hicks and James Chapman talked about the current line up of their crew and the standard of competition they will face at the Olympic Qualification Regatta in five weeks time. Hicks commenting on the club’s accessibility to everyone from novice, junior, club to elite level which makes Sydney a world class Rowing Club.

The night finished off with some delicious duck pancake hors d’oeuvres and the viewing of a few races caught on video highlighting some of the club’s recent successes in the Men’s Open Eight race at Gold Cup 2015 which Sydney again claimed the title of in 2016 and Henley Royal Regatta finals in the Visitors and Brittania four. To make a donation to the Foundation, Click here.