Sydney won Henley on December 15th, 2018. It all began with a decision being made in the snooker room of the Kahane Lodge in Perisher and what followed was a wonderful season of training, racing and winning; culminating in four Henley medals, for four athletes, made possible by the efforts of an entire club.

The decision to win Henley was an easy one, it was the one dream of a rower that unites every age and ability. Unlike most races or selections, the only requirement is to train hard and be a member of a club. The next steps were even easier: follow the programme, trust the process and knuckle down. If you do that, the results are bound to follow, and that they did. With an outstanding set of small boats results in January, and the best state champs in recent history, the stage was set for an excellent international campaign.

Henley was at the forefront of athlete’s minds through the domestic season and post nationals there was a palpable excitement. The squad was decided, perhaps by slightly default, but also by the choice of those that wanted to win at the top amateur event in the world and after a short reset over underage trials, the final performance started. We decided on two fours instead of an eight, to keep competition alive, and this lead to a fantastic training environment, alongside our national reps. 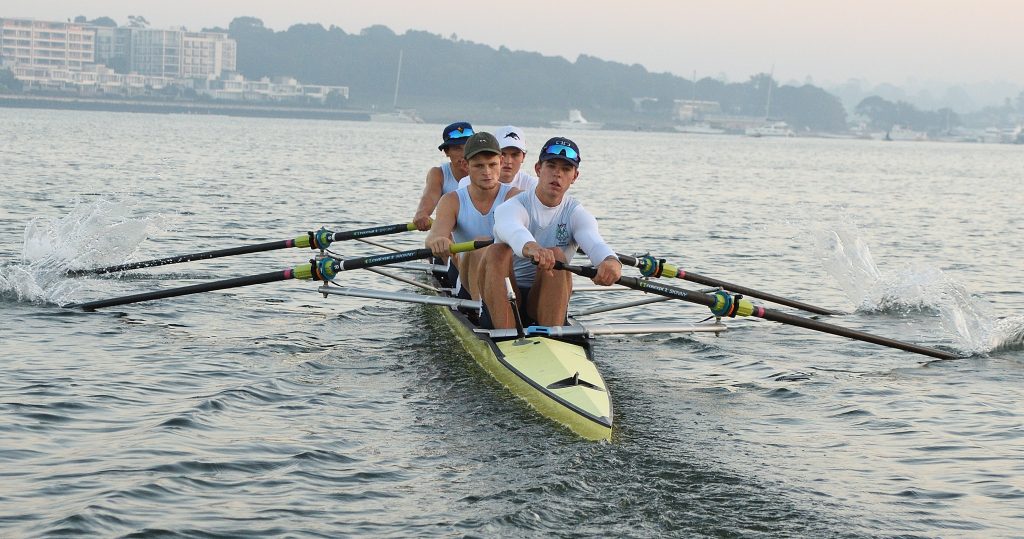 As the weather turned colder and the water got slower, it was this squad solidarity that kept everyone going; the belief that we were bigger than the sum of our parts. The closer we came to departure date, and the bigger the training peaks became, this squad mindset became evermore crucial. Have each other’s back, no matter what the stop watch or thermometer says and the result will happen.

In the last fortnight before finals day, we prepared to fly. Fresh kit was collected, bags were packed, sleep schedules and jet lag mitigation was planned and off we went. Happily, we travelled with the knowledge that neither crew had to do qualifiers, meaning we could hit the last week of training in Henley hard, as was required.

The squad met at Heathrow well rested and after some short side trips for our Englishmen, regrouped at the boat tents in Henley. For debutantes Torun Olsson and Nick Dunlop, this was their first time at the course, and from the whole team there was a palpable sense anticipation. We did not row on arrival, both to keep this anticipation building, as well as it taking several hours to rig the boats as specifically as was required!

The first row on the Henley stretch is always thrilling and the boys came off the water on Wednesday grinning: times were fast, paddling speeds were great and the boats were familiar. 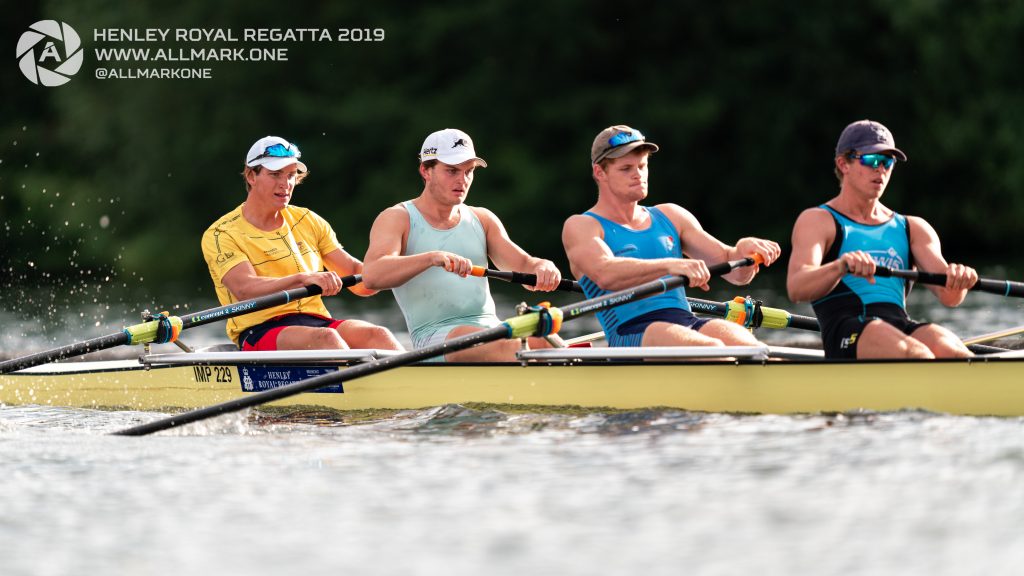 Then the jet lag hit and times plummeted. But, forewarned is forearmed. The crews knew this was coming and rolled with it; it was all part of the process. As we trained, we had to keep tweaking the rigs to get them spot on and as the jet lag abated towards the weekend, we got back on track.

Saturday morning and we woke early for a pleasant row in the English countryside to Reading for the quaint river regatta: Reading Town. A 12km row through rolling pastures and three locks lands us at the 800m sprint regatta. The 4- took the win, in a fairly weak field, but the 4+ just missed out on the W to a skilled crew from York. We packed up the boats and headed back to Henley for the draw and a much-needed afternoon off. On the journey back, we found out that both crews had been ‘selected’, meaning they had been recognised by the Henley Stewards as top crews in our respective events, always a good confidence boost. 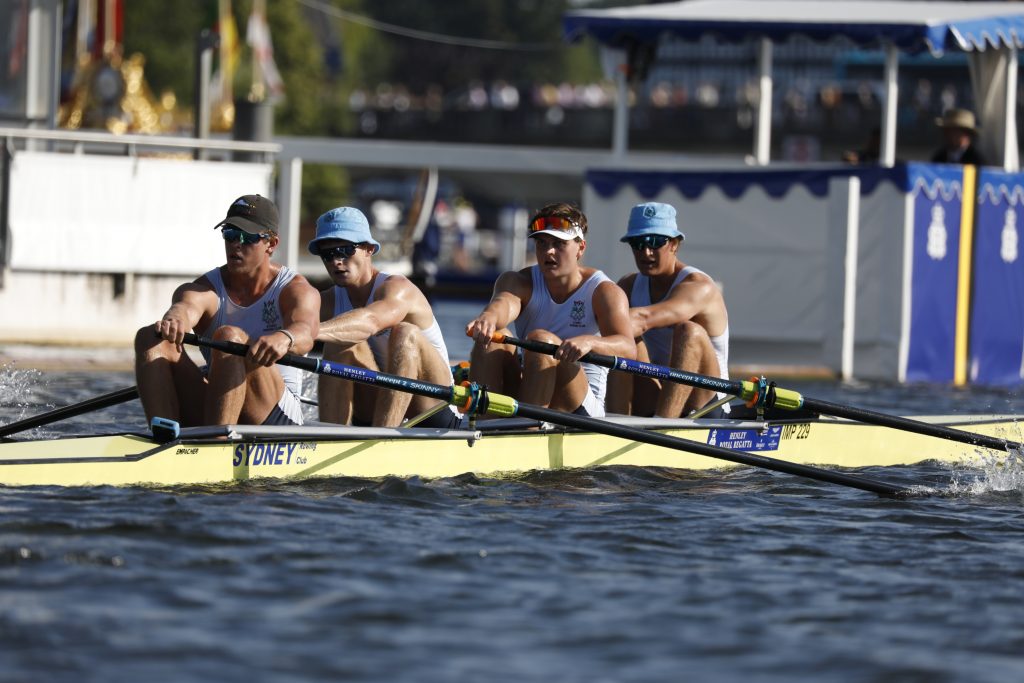 With the 4+ not racing until Thursday, they took an extra day of training on Sunday and made some key changes to get them back to where they were, back in Sydney. The 4- joined them that evening for the last squad paddle before race week.

Monday morning was met with two surprises for the group, a new set of shoes, courtesy of Project B Rowing, for the 4- and SRC branding for the boats. Creating the right racing environment, is as vital as the training mindset in the run up. These were now our boats and blades, and boy they looked good.

Before we knew it, Wednesday was upon us. First race for the 4- and the first test for the squad: have we travelled well? Have we trained well? Have we followed the process? And the answer was resoundingly yes. The 4- took the fastest barrier and Fawley times in the Wyfold, and the confidence started building. Thursday, it stepped up again, with another win for the 4- before the 4+ even had their first, but the 4+ fed off the 4- success and had a fantastic first race. Torun and Nick had won their first race at Henley.

Now that the cats were out of the bag, the analysis began. What was the fastest time to the barrier, who had a close race, who had an easy race, who was the biggest contender, but for our crews, there was no doubt that we were right up there. The support from down under became noisier every day and confidence within the crews grew and grew. 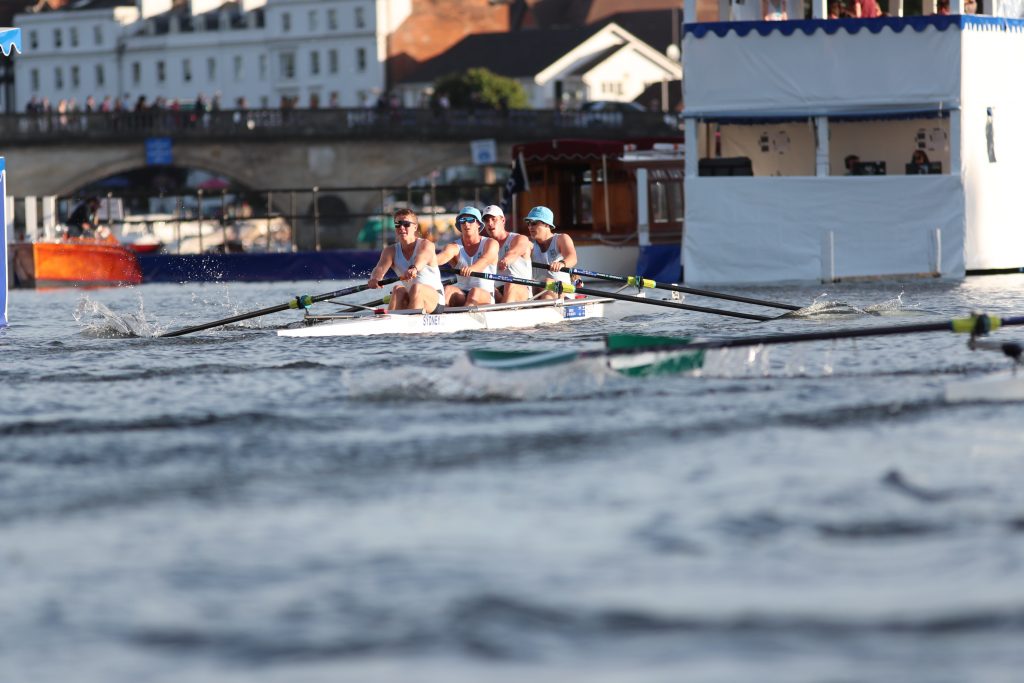 Then before we knew it, it was the weekend. Two crews in the semi-finals, no mean feat for such young crews (both with an average age of 19), and now the tests began.

The 4- came up against the strongest UK competition in Lea RC, a crew that has been developing over the preceding years and the 4+ against what proved to be the strongest crew in the competition. 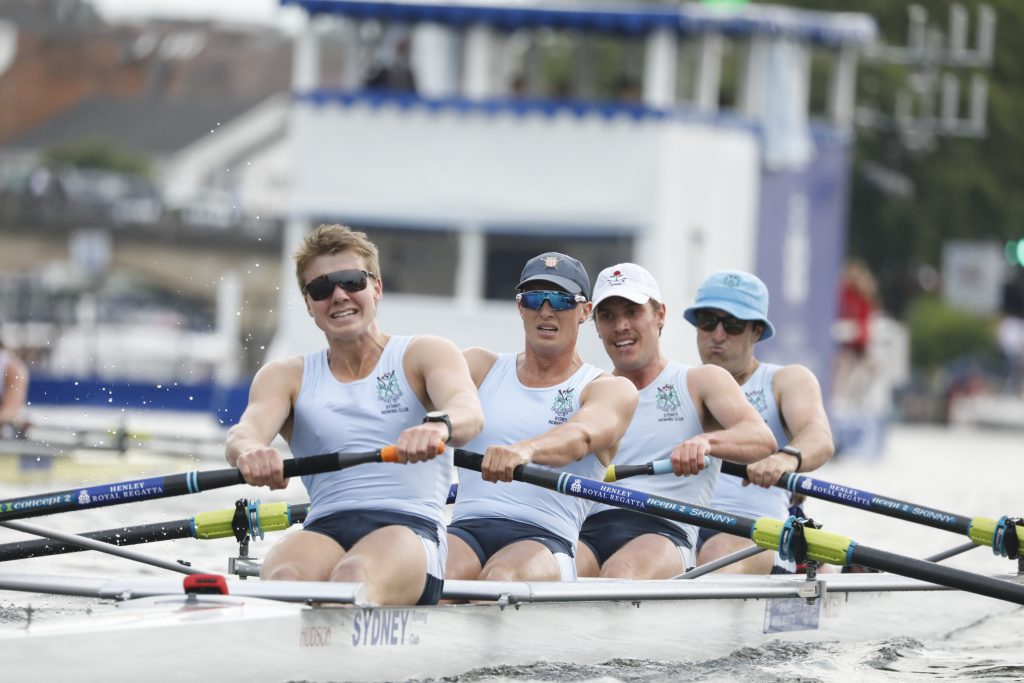 After a fairly nervous looking row, the 4- came out on top, with a little tussle with Boris and his white flag. Sadly, it was the end of the road, after an excellent campaign, for the 4+. Molesey’s top club crew led them to the line and after attack upon valiant attack from our boys, the sheer power of the winners couldn’t be beaten. Happily, they went on to resoundingly beat Mercantile in the final.

The 4- recovered well post-race and prepared for their final. After a gruelling analysis session of the semi-final and some fairly blunt words from coach, they realised how difficult they’d made it for themselves and knew what they needed to put right for the final.

And put it right they did. After the standard excited morning pre-row, and the nervous bite for breakfast, they walked into the boat tents, heads high and raring to go. They believed they could do it, knew what it would take and trusted that they could do it. They had the race of their lives. The perfect start, smooth, but competitive steering and crushingly long and aggressive race pace. They delivered a race within 3s of every record, without a tailwind, and took the win in style. A very sweet victory for Alex Nichol over NSR Oslo, who had been his undoing in 2017. 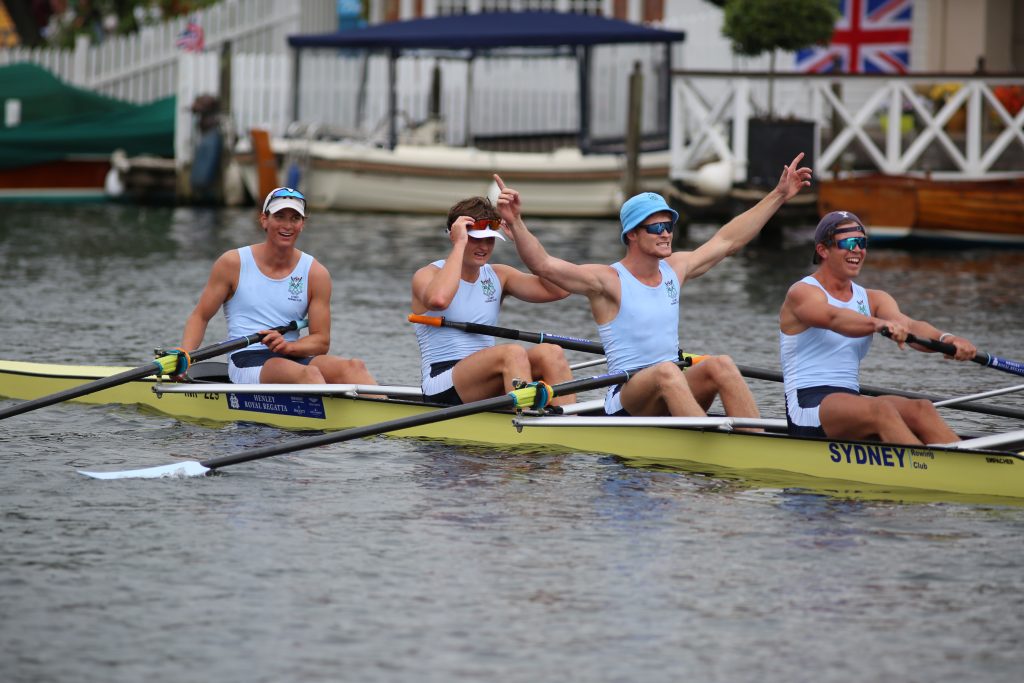 The release of emotion across the line and on the landing stage showed what this meant, the choices they’d made all season, the training they’d done, the social events missed, and the trust they’d built for each other, had all paid off: Sydney had won. Sometimes, all you’ve got to do, is decided to do it, and then the process becomes clear! 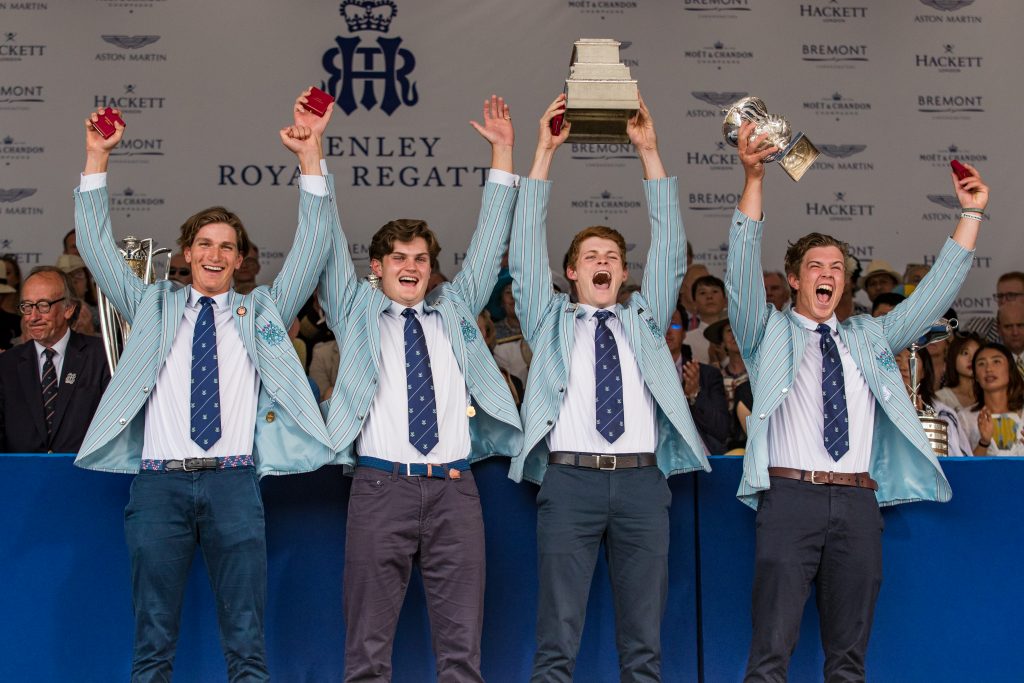 Until next year, Henley!

Thank you to Sydney Rowing Club, for supporting the campaign and making it all possible; Jim Stride, for managing the team; Project B, for helping with shoes; Imperial College and Hudson, for providing boats; Concept 2, for supplying oars and Shore School, for allowing us the use of their coxed four for training.

In what is the youngest Sydney Rowing club crew sent internationally to compete, our u17 women competed in the J16 Quadruple sculls at the Henley Women’s regatta, held in late June. In the qualifying round, the crew placed 5 th (out of 18 entries) to secure a place in the quarter finals – an impressive result considering an acute (and very painful) injury on board. In the quarter final, the crew faced eventual finalist Headington school, who unfortunately proved too strong.

Next up was the qualifying round for the Diamond Jubilee (J18 quadruple scull) at Henley Royal regatta – an ambitious task for a J16 crew. The event had its greatest number of entries, which reflected in the qualifying task of achieving a top 8 placing out of 50 somewhat entries. The crew finished 10 th , only a few seconds from a qualifying placing.

Their final outing as a crew, was the Reading Town regatta, where they won the J16 quadruple sculls.

Thanks to all involved.