Juniors Ready to take on the World – By Coach Lachlan Carter

It’s been a long campaign for the SRC JM4X in their preparation for the World Championships in Rotterdam. Pasha Bevan, Tom Barnes, Jackson Kench and Max Brenner are now in their 18th week of training since being selected and as the 24th of August draws closer, they are all very excited to get stuck into some world class racing. I should also mention that Harriet Hudson is in the same situation but not the same boat as she prepares to take on the best junior scullers in the world in the single sculls event. 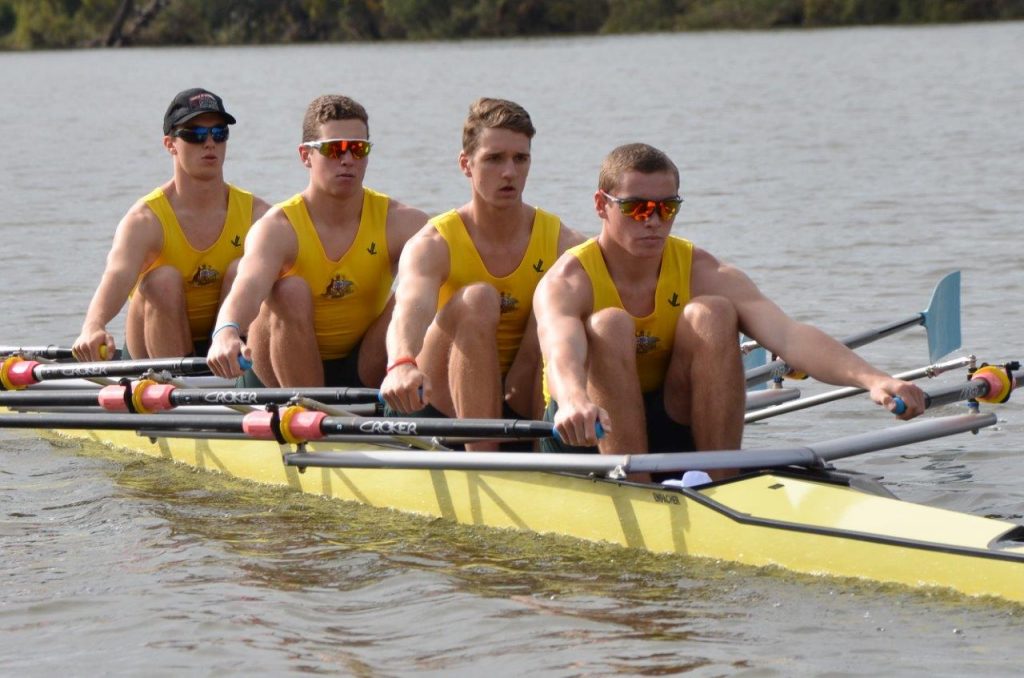 Throughout this campaign, the guys have put in really good work as they aim to #belikemorgs. Their technical sculling skills have come a long way since the end of the schoolboy season when the three Shore boys could not row square blades in a single scull. Using two handles at once was a bit much for the sweepers at first as they kept rotating to their preferred sweep sides but now they are more central in the boat and sculling nicely. It was up to the local hero Max Brenner to show them how it’s done from the bow seat.

As with any crew training for a major event, there are bound to be injuries and illnesses that can put people out of the boat and we have had our fair share of that. Thankfully we are so fortunate to be in a club full of talented and experienced rowers who are all so supportive and RTG when a seat needs filling. We would like to thank Lucas Giles, Charlie Patterson, Harriet Hudson, Leah Saunders and Nathan Bowden for their contribution to this crew by making it possible for us to get on the water when we are a man down. The Henley eight was also a massive help as they provided the JM4X with some seriously good pace to train beside. A few other club crews were also put together to provide that extra bit of pressure for the guys to work beside. Most of all, special thanks must go to Max Duignan for his major contribution as he has been on standby pretty much each week to jump in wherever, whenever. Max has shared his experience and knowledge in sculling and has passed on many skills that have helped to make this crew a better unit. Thanks again for everything you’ve done for us Max.

Pasha Bevan (the male model from Waverton) will be the youngest junior in the Australian team. His ability to step up to the line in the desperate dying stages of the race will be an asset for this crew. He sets a great rhythm and there is nothing complicated about his style of rowing. It’s easy to follow and it is consistent. He ticks all the boxes of a good stroke seat. Pasha has the X-Factor. He has that coolness under pressure which brings confidence to a crew. You know when he’s busting dance moves to his some phat beats before a gruelling erg session that he is going to put some serious watts through the machine.

Tom (Jimmy) Barnes sits in three and makes sure that the boat is well driven and that he enables Pasha to keep the rhythm. Thomas the tank engine adds a lot of HP to this boat as well as experience. He was in the AUS JM4+ at last year’s World Championships in Rio and placed 5th. His desire to be number #1 is what keeps this crew accountable for all the work they do. He sets a high standard and leads by example, which keeps the crew searching for more. In the gym, Tom has found his bench pull to be as strong as his squat so it is good to know that he can finish his strokes off just as hard as his legs can drive off the front.

Jackson Kench is another young junior in year 11. His skills and stillness in the boat are what brings finesse to this crew. His attention to detail comes from his role as the RSM in the Shore Cadet Corps. Jackson loves the drills and the discipline required to row well and look the part. He keeps the blade work clean and gets the crew holding good form while under pressure which is crucial when your crew is under attack from the German or Czech crews.

Max Brenner is the local hero from Concord High. He has spent a lot of his rowing life in a single scull which has taught him much about discipline and toughness. His experience in coxless crew boats is also valuable as the three Shore School fellas in front of him have always had a coxswains steering them along the river and telling them what to do. Max calls the shots and makes the commands and the boys just do it.

The boys are under no illusions as to the quality of field in this event. Australia has sent some quality JM4Xs to the world champs in recent years and only made B finals. The last JM4X from Australia to medal was back in 2006 with SRC members Kurt Spencer, Bede Clarke and Coach John Bowes placing 3rd. That was 10 years ago and now the Junior World championships are back in the Netherlands and the Australian JM4X is made up entirely of SRC members so hopefully there is a trend.

This campaign has been a really enjoyable experience for me as a coach and I can’t wait to see what the boys and Harriet can do. They have a great attitude and have been kicking goals with both feet every week. I am confident that they will put their best performance forward on the day and do Australia proud. Above all, I hope they take this experience forward in order to make them better rowers/athletes/people in the future. I like to think that they have developed the skills that will set them up to have success in the long term and I believe that we can look forward to some promising rowing careers beginning right here.

Thank you to everyone for your ongoing support. Without you, this would not be possible.