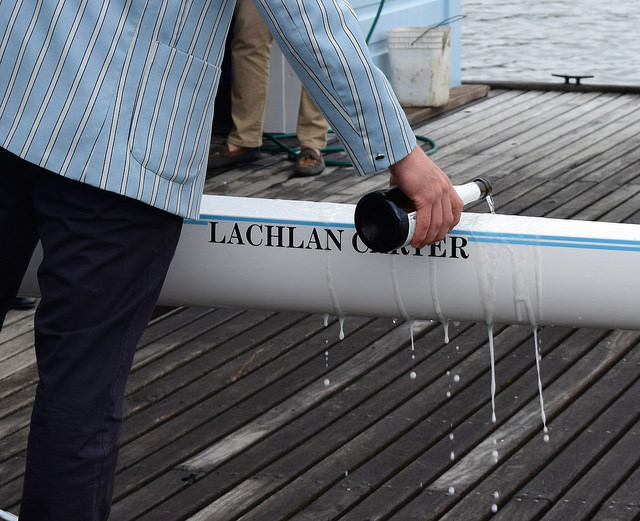 We all know that Sydney Rowing Club is the best rowing club in the galaxy, so it is quite the honour to have a boat in this fleet named after you. For a man who bleeds blue, loves rowing, and believes (to his very core… and enough to publicize to anyone who will… or will not listen) – that Sydney Rowing Club really is the best place in the world… this is well and truly deserved.

We are here to celebrate, and christen the Lachlan Carter. The very first athlete to introduce himself to me when I arrived at Sydney Rowing Club. He shook my hand, and gave himself a name… “Carts”.

Today, I’d like to share some quirks and characteristics which make Carts such a well loved and important cog who makes Sydney Rowing Club a better place to be. Some of the reasons why he so deserves a boat to be named after him. 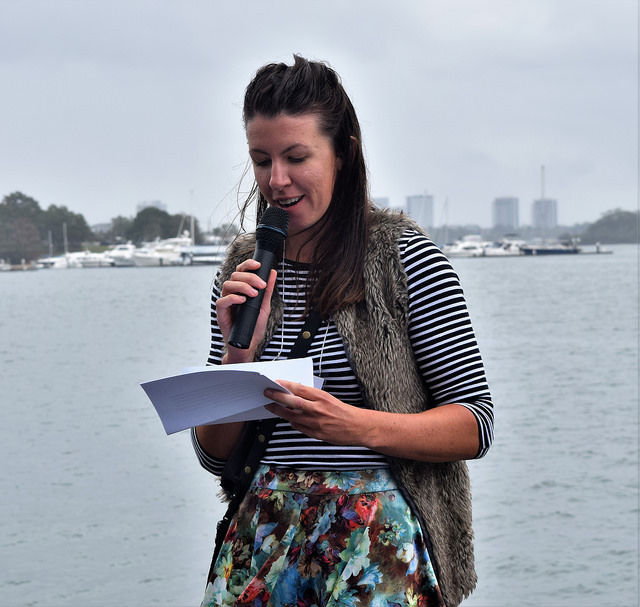 He is a coach, colleague, team player, friend… and in the words of the athletes themselves, a guy who always has your back as a coach and a mate.

The Sydney Rowing Club motto is Mens Sana in Corpore Sano, a latin phrase which in English translates to healthy mind, healthy body. Carts has always been a caring and empathetic person, who understands that it is people who make boats move. It is people who get boats across the finish line first. People are not machines, and everyone has tricky mental days. Carts recognizes that to be physically ready to row well, our mind must be equally ready. He embodies the club motto in his everyday coaching, with his respect for athlete mental wellbeing, which makes us in light blue feel supported. 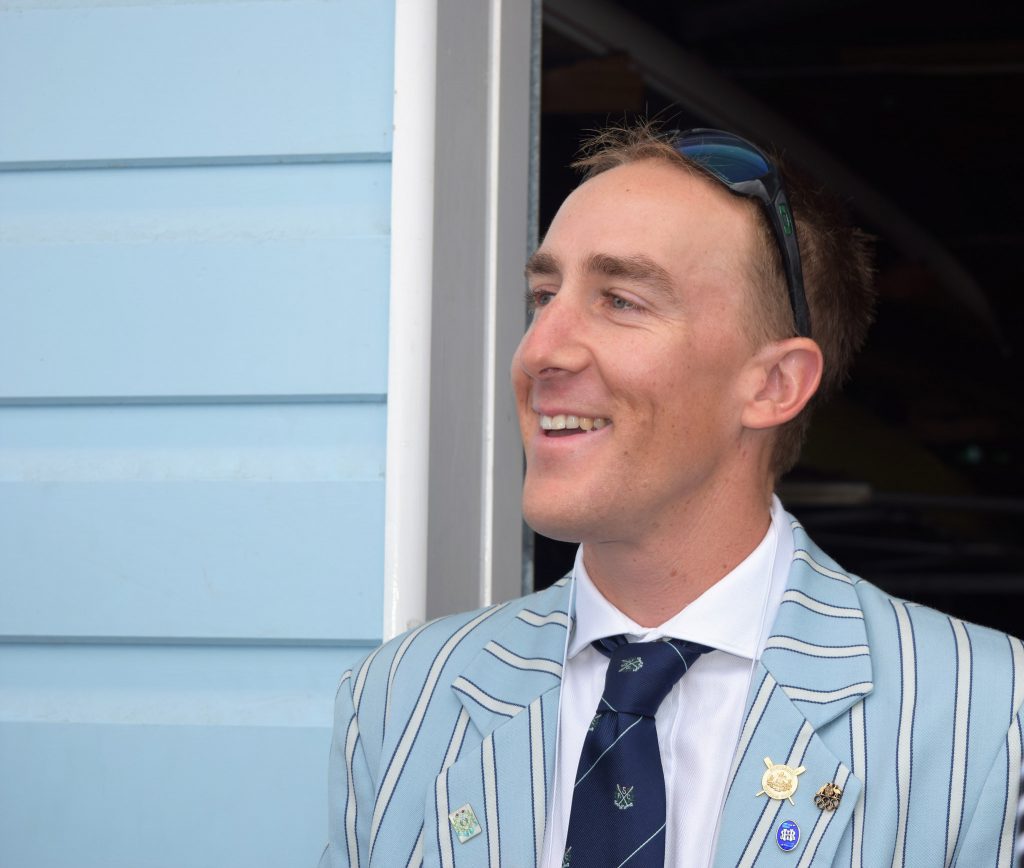 Carts gets around everyone who loves to row. He doesn’t discriminate between the real battlers and the elite, and has a profound knack in recognizing strengths in absolutely anybody. He will notice these strengths in others, and demonstrate them; to upskill all of us. It’s a one team mentality. Tom Gunton is a scat man at the best of times, but he has guts… and he is brave…. You’ve gotta race with that intensity.

You’ve gotta anticipate the catch like Harriet, pick the rest of the boat up. In and on…

It’s a well known fact that you should be doing “Morgs” laps of Hen and Chicken Bay… riiiight around the edges as close to the bank as you can be – no cutting corners. There’s even an acronym named after Morgs himself. Put simply… BLM. Be. Like. Morgs.

Carts is a kite holder. We are his little light blue kites. Allowed the freedom to fly, and the knowledge that someone will always be there to give you the grounding; to give you extra length in the string to go away and do fun, and fantastic things in this country; at SIRC, Iron Cove, Taree Summer Regatta; or overseas… Henley, New Zealand, Switzerland; and someone always there to give you a little tug and a little jolt juuust when your head starts to get a bit big for your own good. We like our team to be modest around here.

Carts is a tricky fellow who seems to have worked out the healthy balance of support and cajoling in his coaching – it’s a sneaky balance and you don’t quiiiiite know which end of the spectrum you’ll receive. There are times when you speak to Carts really needing to melt on someone because you’re having a shit day on the water, and you want someone to tell you that you’re great, and maybe to have a quiet afternoon, decrease those watts a smidgen on the ergo… He instead gives it to you straight and simple – there’s never any messing around. He cuts out all complications… do your job. “Good luck Leah. No matter how hard it is, don’t quit 2 minutes before the miracle happens. Just hold on a bit longer, and you’ll see that it is not far away, and then you’ll be on the other side. Be brave. Be Blue.”

In hindsight you know it’s exactly what you needed to hear…. There are times when you’re doubting yourself beyond what is sensible. It’s paralyzing when you have nerves which make you feel like you’ve forgotten how to put oars in the water… just wanting it to be over and done with. Carts will proffer some wisdom… “You need to accept it now and be prepared to fight. Don’t think about it as something you want to get over and done with. Think of it as an opportunity.”

“When you wake up in the morning, I want you to say “I love rowing”. Think about what you would do just to be involved in the National Time trial if you weren’t on the list. You want to be in this situation, so live it, love it, and have a crack. Enjoy the row champion”. There is a little part of me who believes that Carts has a secret psychology degree tucked up his sleeve. He knows his athletes well enough to be able to recognize when to put those thoughts back in our heads, just when we really need them most. So that we are ready to go again.

9/10 times, Carts is a hands on kind of guy. He is a great balance of proactive and reactive. He is hardworking, right from the little tasks to the big road block challenges. Getting the women’s Sydney Rowing Club program off the ground has always been a slippery devil of a duty. We are nestled here on the Parramatta between several big boys schools – Newington, Scotts, Sydney Grammar, Shore, and Kings. With strong ties geographically, as well as our talent scout JB, it’s fitting that the influx of men to our club almost has a life of its own. Carts works tirelessly to not only recruit women, but create and support a happy environment for them to live and row. With no concrete channels like nearby schools to foster the flow of women to our club, the recruitment and maintenance of the women’s program is a relentless task which rears its head often. In acknowledging this, and as a female rower at the club myself – I have never felt that I am part of an irritatingly tiresome task – quite the contrary. We are welcomed and celebrated.

Carts embodies the club spirit. In fact, he even embodies the training program! Formerly an athlete at Sydney Rowing Club himself, until 2012, when he was unfortunately plagued by degenerated and squashed discs; and a locked up SI joint… A painful mess. You would have noticed by now that Carts is on crutches at the moment, having earnt himself another nickname… The Crip Swing.

Earlier this year, Carts joined some of our rowing squad in the City to Surf. He trained so much, and ran so hard that he gave himself a stress fracture in the head of his femur. A nasty injury that has taken its toll, and we all hope you get better very soon. It is lucky though, that we have such a nice new pontoon that it’s easier for a crip swinger to clamber into the tinny.

Carts is a perfectionist. Seeking better in many ways. There are times when he will come up to his athletes and say… “I’ve been telling you to seek this feeling in the boat… Don’t do that anymore… I just rowed the Kirsten Liljekvist to Silverwater and back (it was bloody awesome, HOW GOOD are the trainer singles, you’ve just GOT to try one out). Anyway I tried some things, and here is what you’ve got to think about instead of this… He will go on to describe the feeling he has been seeking up to Silverwater and back – dodging all those boys schools along the way.

Carts is a STRONG candidate for making sure that boats are slipperily clean, chamois and everything. The way that boats are tied on, little knacks around the shed, trailer packing… You name it. It’s gotta be good. Carts has the eyes to make sure it’s done well.

Carts certainly has his finger on the pulse. He knows the lowdown in rowing, hot off the press… With ties to Rowing Australia, Rowing New South Wales, NSIWS, and clubs from rural NSW, right around the country. He knows the best positioning of the Sydney Rowing Club sticker placement on our cars…. AND frontline of fashion – “everyone has to wear the retro Sydney Rowing Club shirts. We look amazing. Like a team.”

Carts always thinks outside the box, and is ALWAYS willing to share with whoever stands nearby… “We need a prime minister who can stop the wind”… “I wonder if the water under the Gladesville bridge is shallow enough so that if we blew the bridge up, no ferries would be able to get past”… “Sydney Rowing Club should just put a tennis court right on top of the club”… “having a shower is like vertical swimming”…

Harriet Hudson is the lucky girl to row in the Lachlan Carter. She says: I think that Carts has definitely seen all of us at our best and at our worst, when I moved down to Sydney it was definitely the case of a country girl in a big city. Since moving down, Carts has helped me more than I begin to describe. It really comforts me to know though that Carts has always got my back as a coach, and also as a mate. I think it’s a good luck charm and I feel honoured to be able to row in a skiff named after a legend like carts.

Finally… Carts is the person you want to see at 5am in Winter before a long session… when you’ve left your speed coach at home… When your races are too close… and some mysterious liaising in funny regatta language with the boat race officials needs to be done so you can actually get to the start line on time… when you want some extra video analysis… when you missed out on winning that race by juuuuust the tiniest bit! Frustratingly so …. Or when you won that race by 20 boat lengths…. When you just need a hug… Here for the long haul alongside us all, through thick and thin, high and low. Carts, you make Sydney Rowing Club a better place to be. Congratulations on your new boat!