The second of the JB Sharp Regatta series was held last Sunday over the marathon 900 metre UTS-Haberfield Course in Iron Cove. Cold weather failed to temper the passions of the Sydney squad on the day and this proved to be the ideal state for on water performance as the club enjoyed numerous successes over the day.

Gifted pole position on the Leichhardt banks by the early morning advances of Captain Pauli, the mood was buoyant amongst the SRC contingent racing at JB Sharp II. With the club again boating large numbers of juniors the chances of a lift in point score standings seemed high, and these hopes were boosted as key rivals were spotted spurning the chance to race in favour of training drills. While perhaps this strategy will deliver a long term dividend for its investors, the SRC squad had their minds only upon immediate returns.

Beginning the Sydney charge for the day was young Timothy Trent who boated under simple instruction – to crush his enemies, see them driven before him, and hear the lamentations of their coaches. To this metric he was surely successful as he won the under 16 single scull comprehensively.

In the women’s open double Sydney was represented by Debora Prospero and Sara McDonald, and the girls put on a dashing display. Jumping swiftly from the start the Sydney boat led throughout, staying on resolutely in the concluding stages to hold off late challenges from the Tara School and Sydney University.

The open men continued their strong form with a second win in as many races for the open four. The quad of Callum and Liam Moran and Joe and Tom Bennet proved that even with the levels of industrial contaminants in Iron Cove, blood is thicker than water, with a resounding win soon after to take the men’s tally to 2/2. This strike rate would drop to a credit average following a poor showing in the eights, where again Glebe had Sydney’s measure.

The point score competition is now evenly placed heading into the 3rd regatta which will be held on the Drummoyne course on the 10th of July. 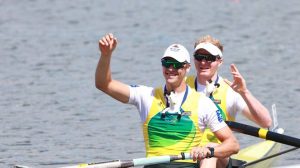 With two entries in the men’s pair, SRC was represented in both Australian boats. The No. 1 boat featuring Spencer Turrin and Alex Lloyd, while the number 2 boat saw UTS’ James Medway and SRC’s Josh Hicks pair up. Spencer and Alex cruised their way into the A final, and drew the lane next to the top ranking “Kiwi Pair”. While chasing down the Kiwis was always going to be a difficult task, the Aussie pair held their own, pushing away from the rest of the field and finishing with a well deserved silver medal. Josh Hicks and James Medway drew lane 6 in the B-Final. The Harvard graduates looked to make their move at the 1500 metre mark and had pulled into first place, however with the finish line in sight, it was Germany’s second crew, along with New Zealand’s, that made the surge in the last 250m to take first and second, with Australia in third. In the B-Final of the M2X, David Watts and Chris Morgan finished in 2nd place. Click here for Rowing Australia’s full story. 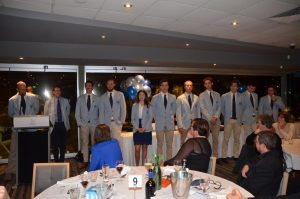 Over 100 supporters gathered in the Smoking Goat Restaurant on Sunday night to farewell the Thames Challenge Cup eight, who are jetting off to the UK today. Guests enjoyed a three course meal, loud and silent auctions and an entertaining introduction of the crew by Andrew Rowley. We wish the crew all the best for the regatta which commences on Wednesday 29 June. #TeamSRC. 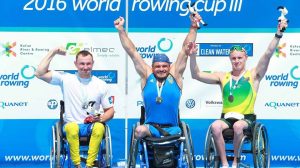 In swift conditions on Poznan’s Malta Lake, reigning world champion Erik Horrie drew Lane 2 in the final of the ASM1X. Ukraine’s Bondar shot out the start with his countryman Polianskyi with Horrie hot on his heels. Bondar’s fast start meant Horrie was chasing him for the majority of the race and the battle ultimately became between the Penrith-local and Polianskyi for second and third. As they came to the line, it was Bondar who took the win, and a new world record, Polianskyi in second and Horrie in third. Post-race, Horrie said: “I am really happy with this result because the Ukrainians raced really well. Ultimately, everyone is now focussing on is the Paralympic Games, which is the title everyone really wants.” Click here for Rowing Australia’s full story.

The first of the annual JB Sharp regattas was held last Sunday, with Sydney represented by a big turnout of juniors racing on the Glebe course. Despite a successful day for the club on the water, the regatta ended in controversy as the SRC men’s eight was disqualified from the final event for a breach of strict protocols enforced by regatta officials. 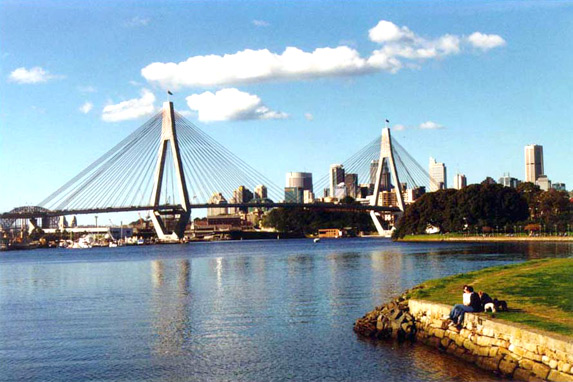 SRC was undoubtedly the best represented club at the first of the JB Sharp regattas of 2016, as a huge number of juniors entered the regatta, many of whom were enjoying their first ever race. The rowers and supporters were welcomed by the ever-hospitable Glebe Club and treated to fine conditions on the testing two furlong course in Blackwattle Bay.

The JB Sharp series has a strong focus on junior and novice rowing and provides a safe space for those just starting out in the sport. From numerous entries across the boys and girls novice races, Sydney was able to claim a couple of medals and a strong start to the pointscore competition held over the five regattas. The novice quad of Lucas Chabo, Alex Migdalious, Bradley Deng and Oscar Gullickson were narrow winners, while William Ma was impressive in taking out the novice scull.

The senior men also competed and won the open four comfortably, before taking to the water to race in the open eight. The crew finished a close second to Glebe and returned to the boating area disappointed, but proud of their efforts. These emotions however soon turned to anger as the crew was informed that regatta officials were considering disqualifying the Sydney boat on the basis that one of the crew members, Fiona Coates, was born a woman and this was “a men’s race”.

Spokesman for the regatta, Liam James, did not defend the decision, however strongly asserted the right of the organisers to make and enforce the rules as they saw fit. It is understood that avenues of appeal are currently being considered.

Sydney Rowing Club’s Head Coach Donovan Cech has  been awarded the distinction of Rowing NSW coach of the year. The honour came in recognition of a fantastic season for the club’s elite program under Don’s leadership. SRC also took home the 2015-16 youth pointscore shield and a number of the club’s athletes were presented with scholarships from the NSW Union of Rowers.

The NSW rowing community came together for the annual presentation dinner on Tuesday night to celebrate the 2015-16 season and recognise the best achievements and contributions of the year. The glittering ceremony was held at the UTS clubhouse, with both the athletic and administrative stars of the sport assembled in their finest livery. This included the particularly arresting sight of the St George, Leichhardt and Sydney tables all wearing club blazers in a proud show of traditionalism.

The crowd was welcomed by the delightful Sarah Cooke, Olympian and Rowing NSW Director, who spoke passionately about the struggles at the elite levels and the importance of clubs as the foundation for any success. Then followed a Mezze starter and awarding of youth scholarships from the Union of Rowers. Senior Union official Paul Coates presented the cheques, including to young SRC members Harriet Hudson, Pasha Bevan and Charlie Patterson who were each grateful for the Union’s support of young athletes and better conditions for rowers.

Over the season the Rowing Association runs a number of point-score competitions across the different boat classes. This year SRC won the youth shield for points in under 19 and 21 races held across the season. Club Captain Paul Coates received the shield on behalf of the club and paid thanks to the many volunteers who contribute to the successful operation of regattas throughout the year. St George Rowing club won the overall point-score and recognition as the top club in NSW.

After a main of alternate service of beef and salmon, the CEO of Rowing NSW; Anthony ‘Doc’ Blower presented the individual merit awards. This year the athletes of the year were Sal Kehoe and Cam Girdlestone from SUBC, both of whom were abroad in training for the Rio Olympics. SRC’s own Donovan Cech was awarded coach of the year for 2015-16, a great honour placing him alongside the likes of past winners Nick Garret, Phil Bourguignon and Dr Andrew Randell. Lachlan Carter was on hand to receive the award in Don’s absence and spoke of his keen eye and eagerness to race his athletes.

Other notable honours recipients were Vic Walter, who received the Rusty Robertson award for his outstanding contribution as a regatta official over many years and Dave Jennings, who was awarded schoolboy coach of the year for a record 5th occasion. The night was enjoyed by all and thanks must go to the Rowing NSW staff for their efforts in organising the event.

The mature members of SRC migrated north to compete at the 2016 Australian Masters Rowing Championships held at Lake Kawana, Bokarina a suburb of the Sunshine Coast.  The first SRC person I spotted was Dorothy De George, who arrived at the athlete’s briefing in her stylish SRC blazer – the only athlete to wear full club blazer.  It was Tony Brown who noted this and commented to the crowd.  Tony was invited by Rowing QLD to oversee “Field of Play” – with his knowledge of the equipment he was a great resource and his efforts were very much appreciated by all.

A total of 41 athletes travelled up and were supposed to compete in 21 events.  A total of 17 medals were won – 7 Gold – 4 Silver and 6 Bronze.  Not only did athletes travel but support crew as well – Skello was the first person I saw wearing the volunteer polo.

The Sunshine Coast unfortunately did not live up to its name – the conditions were rough to say the least – but all the Sydney rowers kept smiling and racing to the best of their ability.  Ken Ambler was listed as competing in a total of 11 races – a great effort for any age.  Due to the conditions racing was postponed on Saturday morning – racing commenced at 1.30pm.  All the Interstate races saw great competition between states.  Sunday the rain stopped but so did the rowing due to the strong winds, with the boat holders not able to hold boats.  Running starts were tried but were not successful.

Rowing Queensland hosted the event and made every effort to make the Regatta enjoyable for all – The stadium across the road provided some shelter and also made for a great presentation area.  The Wallabies had a closed session in the Sunshine Stadium they also wandered down to look at the Rowing.  They could not handle the weather conditions – not as tough and committed as rowers – they left and the rowers stayed.

It was great to see the spirit of Sydney Rowing Club shining even though the sun was not.

Join us for a night of celebrating as we send off Sydney Rowing Club’s first Thames Challenge Cup 8+ in seventeen years! Click here for the flyer and here for the booking form.

Click here to check out the awesome raffle prizes. See you on the 19th in the Smoking Goat. 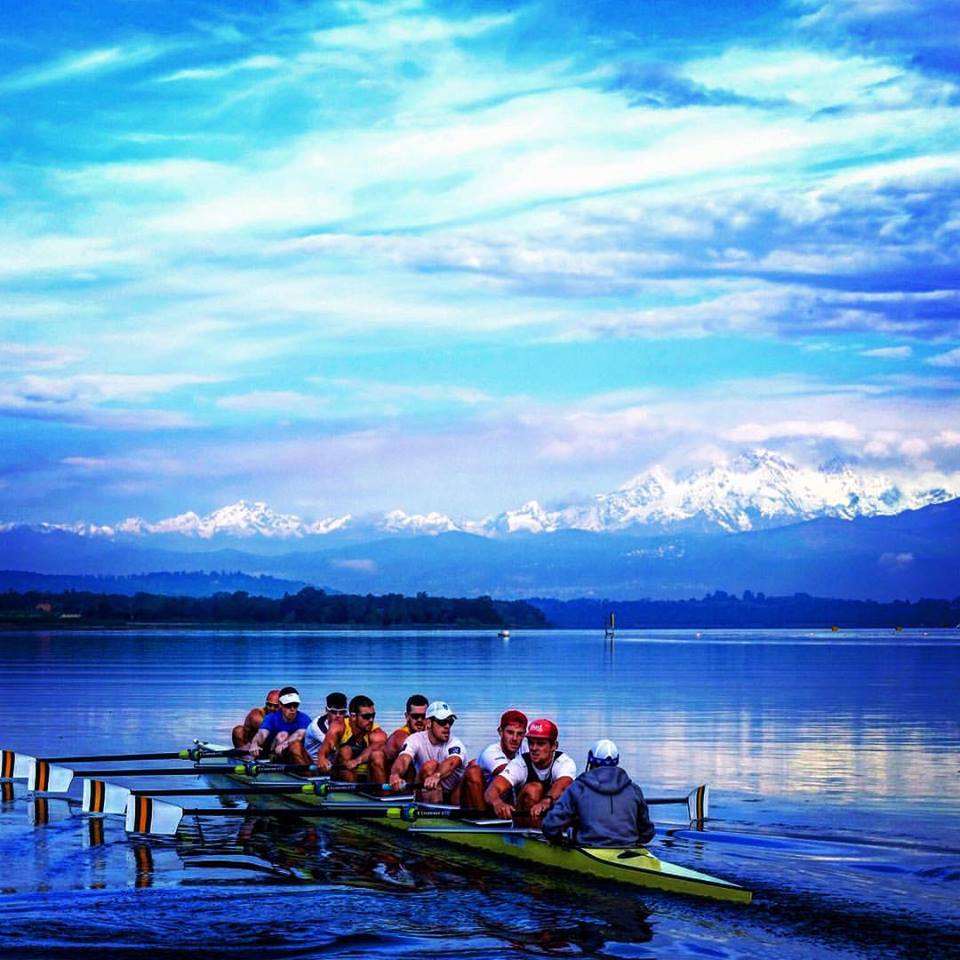 Check out this drone footage by Rowing NSW of the Aus Men’s 8+ training hard for the Olympic Qualification Regatta, featuring our SRC boys Josh Hicks and James Chapman as the bow pair. The crew will debut in just over a week’s time at the Regatta of Death on the glassy waters of the Rotsee in Lucerne, Switzerland. Look out also for the cameo by the Women’s 8+! Keep on swingin’ fellas! Click here for the regatta website. Photo Credit: Tim Masters