Dom Grimm attended Sydney Boys High and has been a member of the Club since the 2006/2007 season. In 2007 he competed at the Henley Royal Regatta and in the Club’s U23 squad in 2008, where he narrowly missed out on a seat in the U23 men’s eight.

He then joined the AIS’s residential program in 2009, training with the newly formed National Centre for Rowing Excellence. At nationals, he placed second in the open coxless pair and open coxless four and was a member, along with James Chapman of the winning NSW King’s Cup eight oared championship at the Australia National Championships at Lake Barrington. Dom was then selected as the stroke seat of the 2009 Australian Senior A men’s eight to contest the World Rowing Championships in Poland, before being replaced due to injury.

After returning from injury, Dom continued to train at the AIS and went on to win the U23 men’s coxless four at the National Championships and again won the King’s Cup for NSW.

Dom was then selected to compete in the coxless four at the U23 World Championships in Brest, Belarus and won the gold medal in this event. After his success at the Worlds, Dom returned to Australia to trial for the Australian senior A team and then went on to win the 2010 World Championship in the Men’s Senior A coxed pair at the World Rowing Championships at Lake Karapiro, New Zealand. 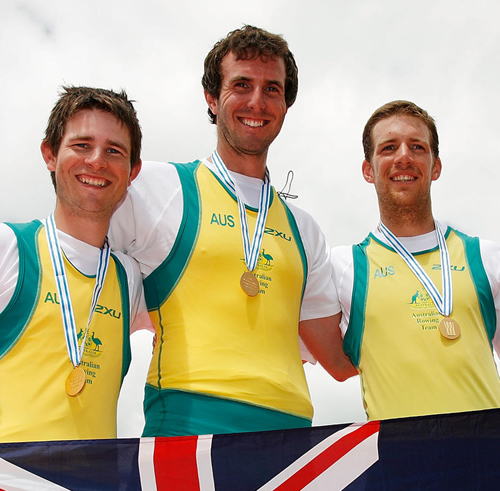