Chris Morgan started his athletic career as a competitive walker, however, was introduced to rowing in his third year at university in Adelaide. It was “O-week” 2003 and Adelaide University Boat Club (AUBC) manned an exhibition where students were invited to try out on the ergometer – with a prize of a carton of Coopers Pale for the fastest 500m – which was all the incentive that Chris Morgan needed to try out rowing.

Chris had never sat on an Erg and finished the 500m in 1.27m, taking home the prize.

Following on from that result Chris was invited to take part in the ‘Learn to Row” program with AUBC and he joined the boat club. Interestingly, the AUBC named the eight people with a future in rowing after the Program –  Chris didn’t make the cut. But that wasn’t a deterrent. 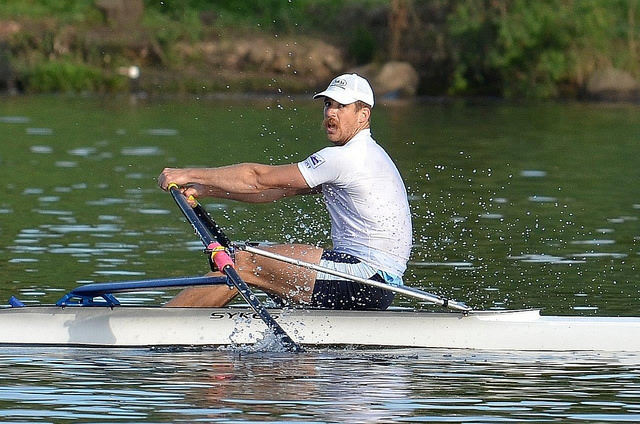 In 2003/04, in his first season of rowing – Chris Morgan won a gold medal at the Australian University Games and was later selected to the Australian Rowing Team training at the AIS.

Chris competed in the Men’s Quadruple Scull event for the Australian Olympic team at the Beijing 2008 Olympics. His crew won the heat in a world’s best time of 5:36.20, beating the previous fastest time, set by Poland, by a second. His crew finished fourth in the final.

In 2010, Chris won the Australian National Single Scull Championship, becoming the first South Australian to do so in 40 years.In November, he won the World Championship coxed pair with pair partner – SRC’s Dom Grimm – and coxswain David Webster at Lake Karapiro in New Zealand.

In an upset win, at the 2011 World Rowing Championships Chris, rowing in the Australian heavyweight men’s quad scull, defeated the German crew to win gold after the Germans caught a crab on the line.

Chris joined SRC for the 2013 season, and has bled blue ever since. After a few struggles with injury in his third Olympiad, Chris was selected in the Men’s Double Sculls for the Rio Olympics with (now SRC member) David Watts. The duo took out the B final in what was their best race of the season.

Since the Rio Olympics, Morgs has continued to row at the club, passing on his knowledge to younger members. Morgs can often be found subbing into an boat when the men’s program is short of numbers, even jumping in the Club Men’s Eight to take out the National Champs in 2018.